The Tearcell Arcade is a 12 month project to prepare my skills for game development. Each month a new 'challenge' is attempted, and the results of the month is posted here. Some months, a fully formed game could emerge, some months it will just be a tech demo at best. The important part is to get experience and move on. At the end of the 12 months, a proper game will be developed based on the lessons learned in the previous year.

For the time being the engine being used is the Godot Engine as the node structure it uses and its python like syntax clicked with me almost immediately.

After learning about the Godot engine and completing some basic tutorials, the May challenge became making a basic 2D platformer.

Nuclear Winter: Giraffe was a concept I worked on in the 90s with a language known as Dark Basic. An arcadey game by its nature, with basic platforming elements, you control a giraffe and have to dodge all sorts of things. Loosely modeled after an old cartoon 'Sheep in the Big City', NWG is meant to be over the top and cartoony. Arcade mode was the original goal, but as I finished the loop rather fast, Story mode was added to challenge myself further. Unfortunately it was created without a plan, and it shows in the level design and lack of 'fun'.

The June project started as an attempt to make a vertical scrolling endless platformer for mobile devices, with an emphasis on timed jumps, vertical agility, dashing, and a bit of combat for fun.

This was obviously a bad idea from the start.

Thankfully within a week I was able to identify this, and converted it to a more combat focused 2D platformer instead, going for a Castlevania inspired idea I had backburnered for some years called 'The Chronicles of Aronacht'.

Mistakes were made and the 2D beat em up, became a mini metroidvania.

Please note the Richter Belmont sprite, and portraits of Alucard and Shaft are used without permission and are fully owned by Konami. I do not own it, I do not make money off of it. It is a placeholder used for educational purposes. To avoid accidental distribution no direct download of Boundless will be available.

A bit bored of 2D platformers, I decide to switch gears completely and try an RTS game. The genre isn't as popular as it used to be, so I figure it should be pretty solved and probably won't be hard to get things up and running properly.

That was obviously incorrect. There was little to take from the previous projects that was relevant here, and I complicated the learning curve by starting out as a Starcraft clone and going for an isometric viewpoint. While I'm proud of the work that I accomplished, this can only be considered a tech demo at best. You can select units, make them attack units, move them around, some will harvest and return stuff to the building nearby. But you can't make them attack buildings, and there is no steering behavior. It's ready to expand into something more, but overall just was too much to take on from scratch in a single month.

DragAndDrop button uses forked code for the drag and drop controller and is available here.

While I had hoped to continue some work on the RTS project, hoping to turn it into something more than just a tech demo, that didn't end up happening. Instead my focus went to this site and learning how to better create, maintain, and use backend apis. The API needed a project to tie it together, however, after all you need a real world problem to really bloom.

The Safeharbour projects have long needed a builder to get updates to the end users as fast as possible, and this was a good use case for an API. The mobile app could pull the data as JSON, and format it up. Backend database was easy, but we needed a front end. My experiences with that can be read on the blog, but I ended up using Vuejs. This was a lot to learn in a month, but I succeeded and now a useful tool can be deployed to my customers that they weren't expecting.

Tool building as a whole may not be the most glamours aspect of game design, but its a very important one, and hopefully I can use this experience to build useful tools for a team down the road. While a full release of the tool isn't something that will happen since its for customers, a self cleaning demo version will be made available shortly, so you can play around with it from the direct link below. To access it, use the credentials august_demo with the password gametoolz.

Nothing like coding a game again to take your mind off endless server configuration and javascript frameworks. The challenge this time was my own take on a classic Zelda-like. Blue Noise as linked below has some interesting beginnings, and doesn't quite realize its zelda-ness. It doesn't feel like a zelda adventure, and the controls and responsiveness are not quite an action RPG either. This is the first time I'm afraid the vision didn't quite come through, and this is mostly because I was unable to focus my time enough to finish BOTH sides of the game. That second side, will become the October project, but this month saw me learning Pixel art basics, getting involved with the Godot community via Plugin testing and debugging and other things that took away from the games scope.

Still there is enough here that I'm proud of behind the scenes, to give this a passing grade, despite being a couple days late.

This month is sort of cheating, as it is a continuation of Septembers project. Streets adds the point and click element to the Blue Noise project, then I went and integrated the existing stuff into the new stuff. But I DID also tweak some of the old stuff and built up 4 new levels in the 'zelda-like' engine. Contract work and real work also made progress very end heavy, but I am VERY happy with the results. For the first time most of the art assets are original work by me, and its sloppy but it's mine. More contributions to great plugins like SyndiBox also decorate this month.

Overall give this one a shot. It actually feels like a game now. If you haven't tried last months, this month is better, so just skip it. Consider the Windows download however. I wasn't able to get the export on the HTML version bug free, and it's prone to hang ups during level loading. No crashes, but its a bit jarring.

GameJam - The Kobolds of OSHA

This month ends early, but was also a double feature of sorts. I decided I'd do this gamejam in October, and for those not in the know, a game jam is a challenge to make a full game in a stiff time limit. I always intended to compete, but originally wanted a year of practice first. But I felt ready, and notified my friends they could all help if they wanted. Many did, perhaps more for me than because they 'wanted' to, but I'm still appreciative. With help arou,d we first practiced the iteration process with a project codenamed 'StormRider' that will become more a focus later. You can try the builds of storm rider starting from b001 through b014 here: https://www.tearcell.com/arcade/stormrider/b001/

We used a similar schema for The Kobolds of OSHA and MUCH more details on the process can be found off of the itch.io page, here, as well as looking through the blog for the gamejam tag. Thats where you'll find the final GameJam version, but you can check out the builds starting from b001 through b017 here: https://tearcell.com/arcade/gamejam/mixjam/b001. While 017 is the final version, the direct play link for this one will point to the itch.io upload. Windows download will be made available after judging is complete as to not accidently cheat.

As I write this the judging is still going on. The marketing is sure stressful! Stressful enough to force a break on gamedev at least until December. Gamejams are worth your time if you want to sharpen your skills, but are also pretty draining. 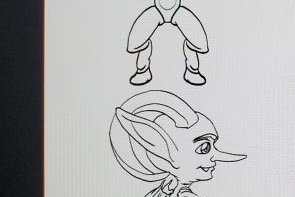 IMP was the 'other' idea for the Gamejam back in November. The idea was to mash together a falling block puzzler with an 'inventory management game' like in Resident evil 4. We decided it didn't fit the mash up theme well enough and went with Kobolds of Osha instead, but put a pin in this one for later as it seemed like it would be fun to play. So this month was focused on really making the proof of concept for the idea, and I think overall it is a success. This is a collab with long time colleague and art support Leia Harris, and she is busy working the art direction, which unfortunately is not really present outside of concept art for this month long project.

IMP is not complete and will continue development and get a mobile release in the near future, so consider this a sneak peak of what we're trying to go for.