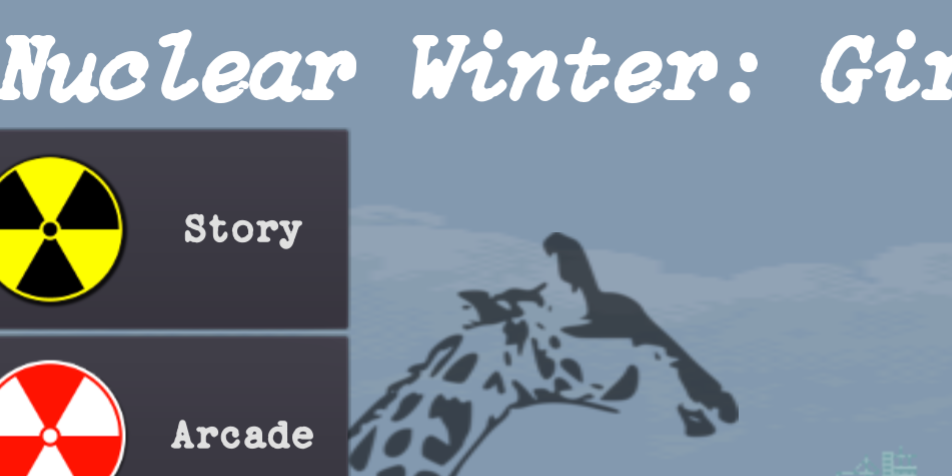 Already a year, and what a year its been in every aspect. I sit here right now with a pulverized kidney stone and gout on my right foot, and all that is just a drop in the ocean compared to what all is going on in the world today. A year ago I barely had a website... that wouldn't really be up and running in a reasonable manner until month 4 of my challenge, but I'll touch on that more when we get there. Now it's time to talk about Nuclear Winter Giraffe.

Coming off of the'Jumper' tutorial from KidsCanCode (which I can't recommend enough as an entry point into Godot), and deciding to be serious this time when it comes to game development, NWG had to be my first choice. Starting as a joke with a friend way back in highschool, a version was created in an OLD and mostly defunct programming language Dark Basic. It seemed like a good entry point in any case.

Looking back what shocks me is how good the core of the game 'Arcade mode' really is. It's simple yes, but there is some depth there, and a few balancing passes, enemy variance, maybe zooming out the camera a little bit, and you'd have a good arcadey waste of time. The other shocking bit is how bad the story mode is. It's funny, don't get me wrong, but the two levels DEFINITELY don't leave you begging for more. The level design is awful. Lack of instructions or a tutorial left my testers lost. It tries to guide you into figuring out the mechanics and does it VERY poorly. The second level is infinitely less interesting than the first, but also shared so little in common with it that it ate up nearly all my development time.

From a code perspective... code written a year ago is very painful to look at. I more or less templated the whole layout after the KidsCanCode tutorials I had been viewing, and while I'd refine that into my own thing in the comin months, it is a bit tough to follow as is. That said the dialog box and event system I use all throughout the next year debut here, which I had forgotten as I though I wrote them all for Boundless. Event and DialogRunner would be changed over time, but the basic node structure wouldn't. Just strong and flexible design.

You really can see the beginning of alot of trends in all this. So as I critique my work over the next year, what I like and dislike about any given project will be listed, and I'll push for three of each.

I think that covers it. NWG was a simple game and a simple concept and mostly executed and deployed exactly as expected in the end. Thats ALOT more than many other projects that would follow, but it's good to be reminded my foundation as solid.